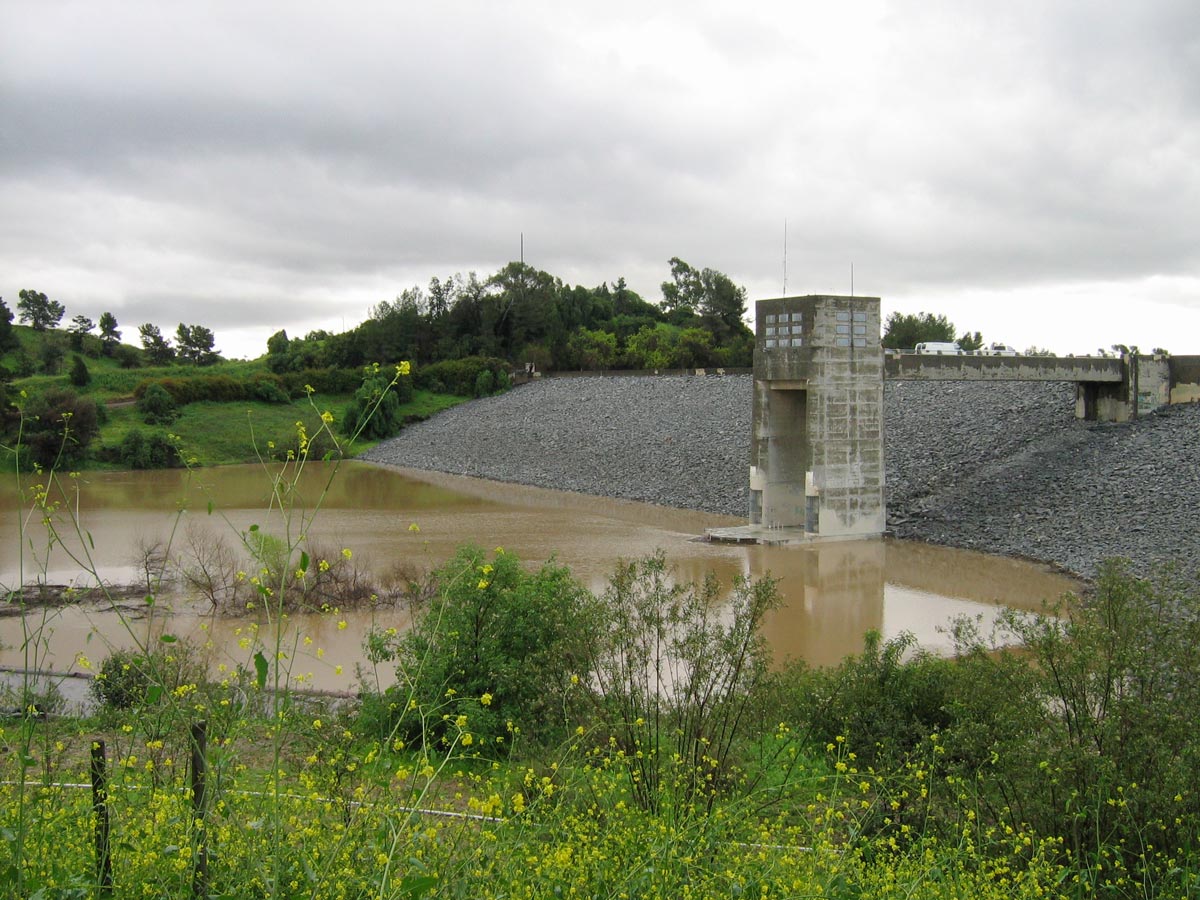 The cost for this lease?  ZERO.

Not only is the lease granted free of charge, the City is allowed to generate revenue and employ people at these facilities provided certain conditions are met.   The lease agreement lays out various conditions like any other arrangement between Landlord and Tenant with no real surprises.

Brea Dam Lease Agreement     (between the City and Army Corps of Engineers)
NOTE:  Best viewed on computer or tablet.  Use the Bookmarks Panel to find the current lease conditions by number.  Otherwise, you’ll quickly get lost.

The City’s multiple breaches of the Army lease is particularly concerning since it affects every sub-lessee on the leased land.  Failure to abide by the rules threatens the livelihood of sub-lessees and their employees who have done nothing wrong.  While I’m not going to expound on every lease condition, the most important conditions are the following:

Note the text (above) in green:  “We use all of our revenue on Brea Dam programs…”  Three days later, I received the General Ledger for the ’42’ Brea Dam Fund for FY 2014-15 in a separate records request.  I immediately noticed expenses charged to 42588 Brea Dam Events for the Fullerton Museum, the Fishing Derby at Laguna Lake, and the 4th of July festivities — art supplies, posters, and an office equipment lease at the museum.  The dollar amount isn’t substantial in the grand scheme of things, but that’s not the point.  Alice lied about the Brea Dam funds being used exclusively inside the dam. 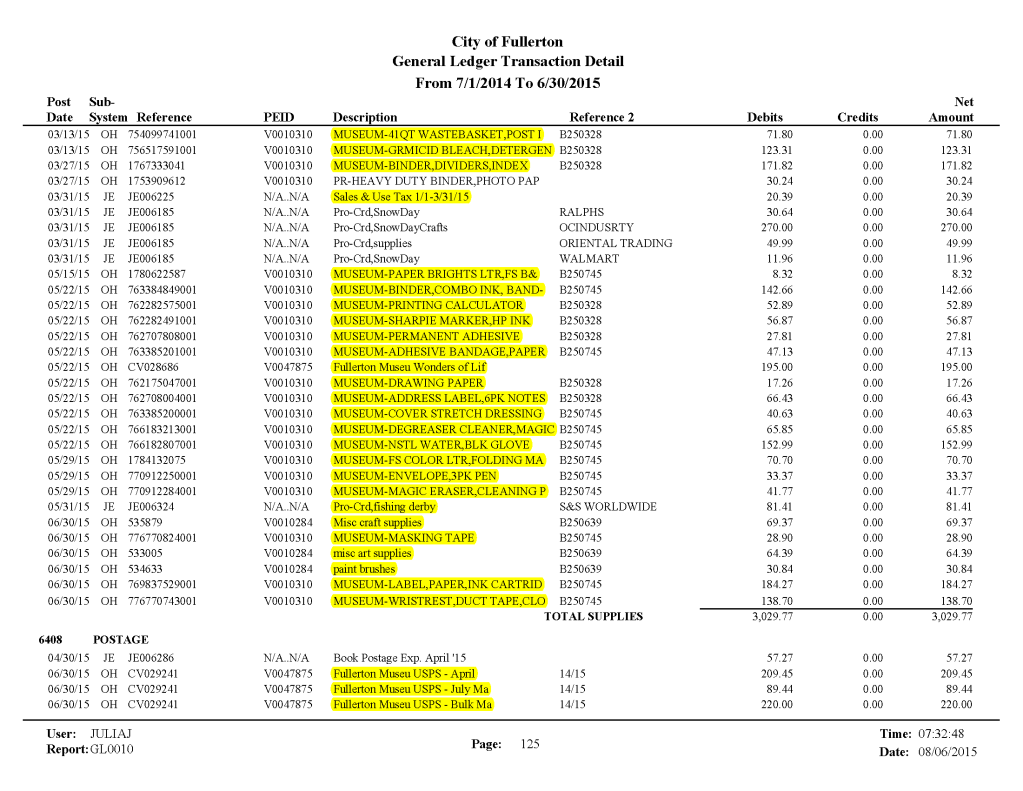 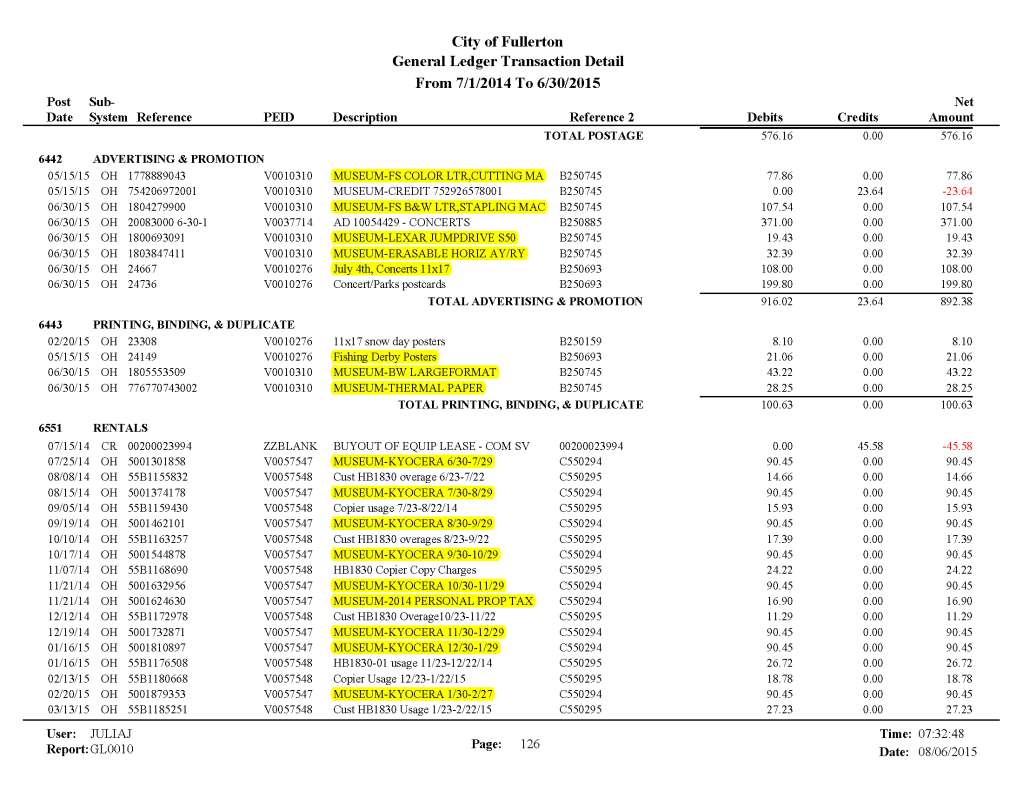 This made it rather obvious that a closer look was necessary to locate other money being used inappropriately.  The Fullerton Municipal Golf Course (managed by American Golf) used over $200,000 in water in FY14-15.  Notice the charge for Sanitation…

The City provides facilities and maintenance in connection with its sanitation program. The facilities being provided are those sewer line and storm drains which are shown as deficient in the City’s general plan. The maintenance activity accomplished by this program includes sewer cleaning, storm drain cleaning, street sweeping, repairs on these systems, underpass, drainage system and channel maintenance, concrete curb and gutter repairs, tree trimming, sidewalk cleaning, necessary equipment, and other related charges. The cost of these facilities and services should, to the extent possible, be charged to the user or to person or property benefited. Sanitation charges are hereby established to accomplish this purpose.
(Ord. 2817 § 1, 1992: Ord. 2227 § 1, 1978: Ord. 2116 § 1 (part), 1976).

The Brea Dam doesn’t have sewers, underpasses, concrete curbs, sidewalks, or drainage systems maintained by the City.  Tree trimming and brush removal costs are paid from Brea Dam revenue sources.  Thus, the sanitation fee (25% of water usage) is not a legitimate charge because the restricted Brea Dam revenues pay the bills.  They are siphoning Brea Dam revenue that would otherwise have to be paid back to the Federal government to fund sanitation repairs and improvements in OTHER parts of Fullerton.  Assuming water costs of $200K annually, that’s roughly $40,000/year being misappropriated.

On a side note, the golf course was only required to reduce water usage by 20% this year.  Why is that, you ask?  Unlike the rest of us, the golf course is revenue-producing for the City, and that’s all that matters to them.  Sad, but true.

There are two cell towers on the leased Brea Dam land, but the accounting ledger only recognizes revenue for one of them:

Cell tower revenue runs somewhere around $25,000 annually, so there’s obviously money missing from one of the sites.  Once again, the revenue is restricted in both instances and cannot leave the Brea Dam for other purposes.  I’ll get back to discussing financial problems on other pages.

These conditions make it abundantly clear that the US Army Corps of Engineers will kick Fullerton to the curb if they ever realize what’s happening and Joe Felz dismisses it as a veiled threat.  USACE has thousands of similar lease agreements all over this country.  The fact they haven’t caught on yet — and, no, I haven’t told them — is NOT an implied waiver permitting this sort of behavior.

We need to remember the Federal government is totally unpredictable and reacts to problems in some of the most unreasonable ways.  Evicting the City (and the sublessees), then driving a bulldozer through the YMCA is not outside the realm of possibilities.  We have plenty to lose by not holding Mr. Felz accountable.

It appears that none of the subleases (or the management contract) are in compliance with Conditions 3 and 23, as written below.

Alice Loya’s reply to my e-mail (her comments are in red) is not good news.

Without those prior approvals, the Management Contract negotiated with American Golf in 2010, the YMCA 2007 sublease, and the Child Guidance Center and Fullerton Community Nursery School 2009 leases were null and void from the start.

I’m guessing the last part of No. 5 has not been complied with in some time.  See Alice’s reply directly above.

The Fullerton Golf Course maintenance building is currently being rebuilt after a fire destroyed the old building in March.  Did the City seek Army approval for design of the new building?

The golf course has a mini “gas station” near the site of the maintenance building.  The tanks for Unleaded and Diesel are above ground and appear to be in reasonably good condition, but who oversees the equipment to ensure nothing is leaking?  The water table is high at this location, so it wouldn’t take very much to contaminate groundwater or flow into Brea Creek during a storm.  Whether you’re an ardent environmentalist or not probably doesn’t matter, as the financial burden alone to clean up an extensive spill could reach six or seven figures, maybe even more.

Part (c) requires approval in writing before applying pesticides or herbicides.  The golf course applies both on a regular basis.  Does the City have written approvals for that?  What about the Fullerton Sports Complex, and presumably Golfer’s Paradise, does the City have approvals to cover pesticides and herbicides at those locations as well?

Apparently nobody at the offices of Jones & Mayer — our City Attorney — has bothered to look over the Army lease either.  The 2007 YMCA sublease between the City and the YMCA binds them to the 1959 Army Corps of Engineers lease which was superseded in 1967.

To make matters worse, somebody screwed up and combined the 1959 Lease with the Supplements for the 1967 Lease as if everything belonged together.

I didn’t inquire about this specifically, so I have no idea if the City is in compliance.  I’m leaving it here for City employees (and the public) to be mindful of.

Prior City staff, members of the City Council, or both, recognized the need to properly delineate the purpose of the Brea Dam Recreational Fund.  They did so with the City Council passing an ordinance in 1978 which remains part of our municipal code:

This wording appears more restrictive than that required by the Army lease.  Note the limitation to “revenue producing” activities.  Many partner youth leagues don’t pay to use the Sports Complex.  (youth leagues playing at night do contribute money toward the field lighting)